As Debbie Reynolds prepares to auction her amazing collection of movie costumes and artefacts, we select some of the highlights…

The star of stage and screen has amassed an unparalled collection of iconic cinema costumes and artefacts which will go under the hammer on June 18 in Los Angeles. The auction contains 3,500 costumes, 20,000 photographs and several thousand original posters. Here are our pick of some of the remarkable highlights from a lifetime of collecting. 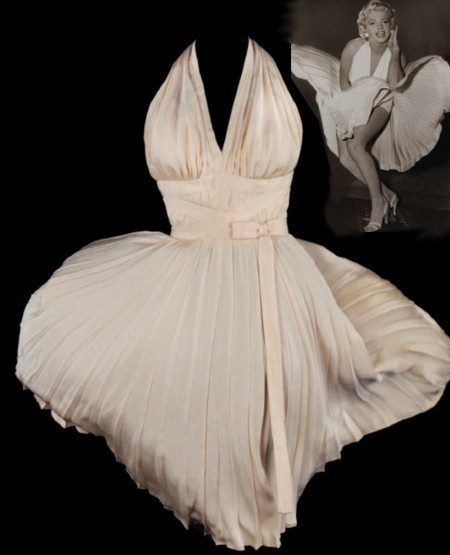 Who: Marilyn Monroe
Movie: Seven Year Itch
Monroe wore this ivory pleated “Subway” dress by Travilla, for her role as ‘The Girl’ in Seven Year Itch in 1955. After she stood on a subway grate and uttered the famous line “Oooh isn’t it delicious?”, the scene, and the dress, went down in Hollywood history.
It was acquired by Debbie Reynolds directly from Twentieth Century-Fox during the ‘pre-sale’ when she bought all of the Marilyn Monroe wardrobe from the studio prior to the auction in 1971.
Estimate: $1,000,000 – $2,000,000

This entry was written by admin, posted on June 9, 2011 at 3:34 am, filed under Аукцион and tagged Debbie Reynolds, Marilyn Monroe. Bookmark the permalink. Follow any comments here with the RSS feed for this post. Post a comment or leave a trackback: Trackback URL.